Shows I Stopped Watching: Orange Is The New Black 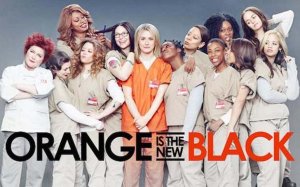 Why did we start watching: Orange Is The New Black is the first Netflix original series show I remember watching. The first season was campy, self-aware fun with the occasional heartfelt flashback sequence. Like the rest of America, we ate it up like popcorn. By seasons three and four the bloom was off the rose, but we decided to give the recently-released season five a try.

What did we think it would be like: Campy shows tend to get sillier over time, so I was prepared for the tone to go a little spastic , e.g., late-period Malcolm In The Middle. But I also expected some fun/humor along with it. (I was wrong.)

When did we stop watching: Episode 2, but it probably should’ve been Episode 1. Or back when they started the panty selling business.

Why did we stop watching: Oh boy. Where to begin…

1) The super unfunny meth head girls. These two make Cletus on The Simpsons look like nuanced satire. There’s a scene I’m mostly forgetting (but it’s too stupid to look up) where these two don’t know how to, like, turn a doorknob. Because they’re DUMB DUMB DUMB. get it they’re DUMB? Hmmm…..
2) Weird sadistic bullshit. I don’t know about you guys, but for me TV is supposed to be at least partially fun. And scenes involving 1) weird sexual abu ghraib type torture and 2) revenge that involves inducing a stroke and 3) a character falling in love with her rapist — are pretty much no bueno. And you can’t pull the “great art” card because….
3) This show is trash. It was always probably 15% trash, but now it’s more like 95%. And 95% trash doesn’t get to go serious and do ripped-from-the-headlines storylines about police brutality. It may get you lots of retweets, but it’s offensive. Stay in your trash lane.

How secure am I in our choice? Completely. I would probably go back and unwatch those two episodes if I could, and I watched eight seasons of Parenthood.

What to watch instead: Go for Trash Done Right and point your roku remote to Degrassi: Next Class. I’ve been watching Degrassi in its various incarnations for a disturbing number of years, and this new season does not disappoint. Like OINTB, Degrassi trivializes serious issues… but it’s so much fun you forgive it. Plus it teaches you important (read: useless) facts about the youth of today, like the fact that there’s such a thing as a “prom proposal (promposal).”

(I’m still amazed by this.)