Today’s edition of The Anthology of Pizza Box Graphic Design brings us to Picnic Pizza in Kingston, NY. Like so many excellent New York area pizza holes, Picnic is located in a cement building minutes away from the highway. 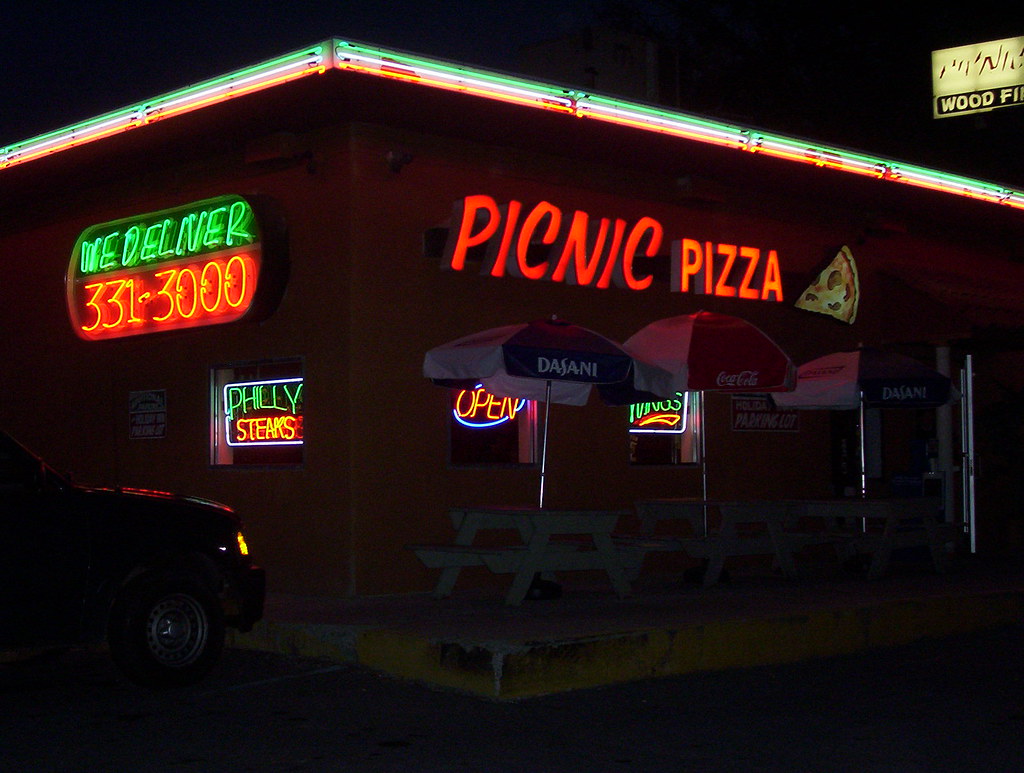 Don’t be alarmed by the aforementioned cement and the casual use of neon — this place is gourmet at its best. During our last visit, Mr. Max, Lena and I shared 4 slices: white with broccoli, eggplant parm, tangy roasted tomato and mushroom, and classic tomato basil (natch). All were exceptional — bold flavor, crisp crust, and the perfect amount of sauce. Massachusetts has NOTHING on this.

Before we left, we made sure to snap a pic of their collection of pizza box designs (assisted by the ever-obliging counter staff). 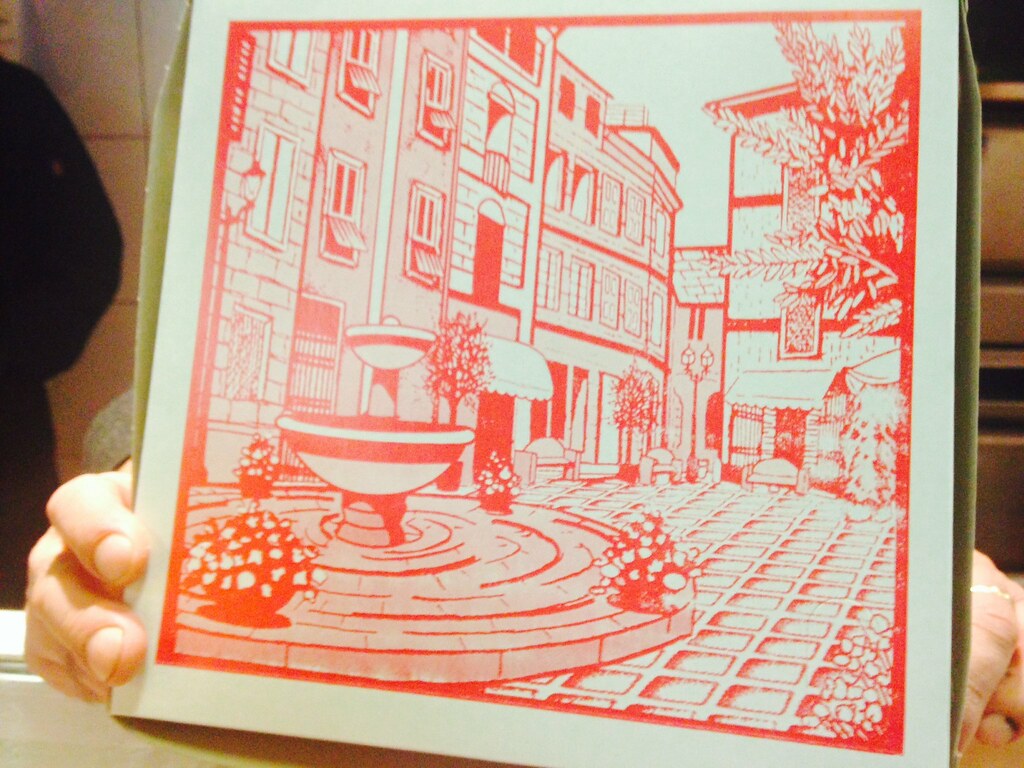 A somber take on the city scene genre. In addition to the tiled streets and brick buildings, this abandoned square features a stone fountain flanked by adorable decorative plants. Interestingly, there doesn’t appear to be any water in the fountain. And where are the people? Is this a post-apocalyptic city? Is that a drone in the sky? Should I stop watching so many war documentaries? 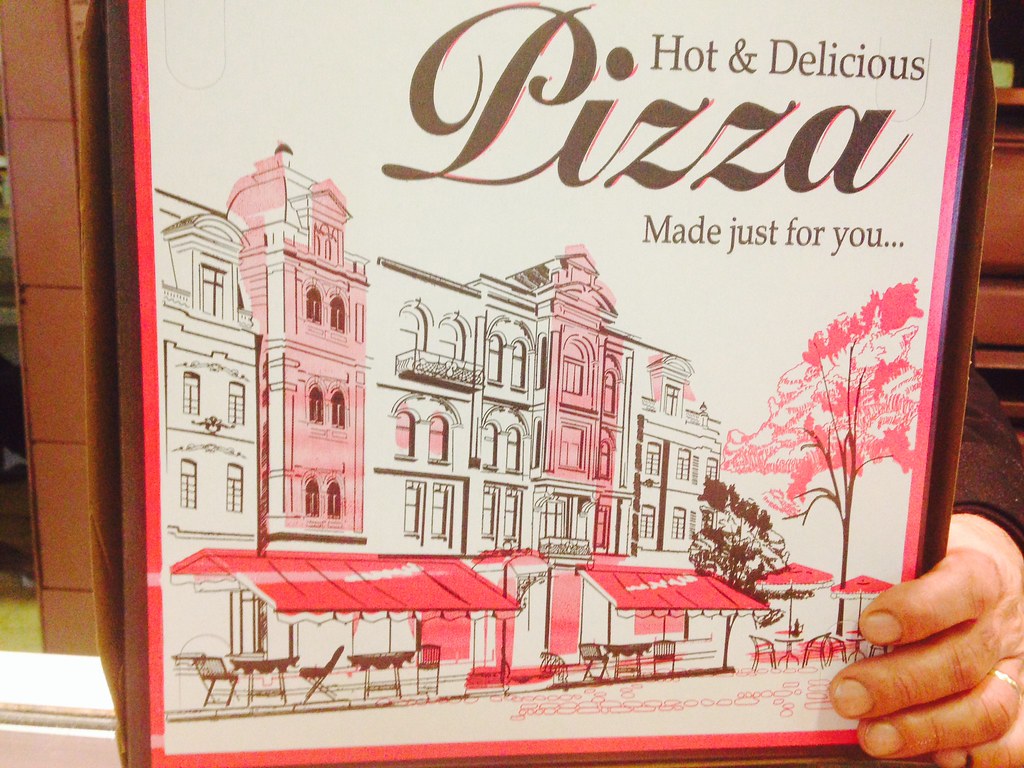 Another quaint city scene. I’ve reached the point with TAOPBGD where i have to search my own archives to find out whether or not I’ve reviewed something. It turns out I’ve seen this one before, albeit in a color scheme I termed “autumn vomit.” It looks much better in traditional pizza box red and black ink, and I definitely appreciate the classic script font. Look at those swirls and loops! God I just love tacky fonts. (Take that, Helvetica.)

We’ve got two piping hot entries for this installment of TAOPBGD. And, unlike the pizzas contained within, these boxes won’t give you heartburn for four straight days.

Visual Assessment: I never noticed the abundance of street scene-themed boxes until I started documenting the trend here on The Lower Crust. I’m guessing boxes like these are supposed to invoke a romanticized vision of Little Italy (primarily drawn from that spaghetti scene from Lady and the Tramp). Like generic product claims (“Fresh dough daily!”), this is pure fiction; modern pizza joints aren’t found down quaint cobblestone streets — they’re sandwiched between a nail place and a Dollar General in a dilapidated strip mall. Because that’s America.

Italian Stereotype(s): There’s a pair of them standing right between the bored-looking couple and the guy on the bike who looks like he was drawn by The Oatmeal. Two for one!

Pizza: Not a Symbol

Visual Assessment: Red and green printing and a script font put this box squarely in the “classic” design category. I’m a little confused by the regal imagery, though. It makes me think I’m looking at a Medieval Times takeout box.

Generic Product Claim: This one’s a little weird. Instead of being “Hot” or “Fresh,” we’re told that “pizza” is a “symbol of quality.” Uh…I don’t think pizza is a recognized symbol of anything. Also, “symbol of quality” is one of those expressions that makes less and less sense the more you think about it.

Box #1 was collected on the trek home from our family vacation in Cape Cod.

Visual Assessment There’s the presence of pizza box red ink, and the promise of “Italian Family Dining,” but the place is called “The Chateau”? I’m a little confused.

Box #2 was found abandoned in a community fridge. I usually stick with boxes from pizza that I personally purchased, but in this case the box was too good to resist.

Visual Assessment: Classicism on steroids. Classic red ink, an Italian Stereotype with a healthy ‘stache and eyebrows, and a nicely rendered slice complete with bubbly cheese.

Rating: Probably one of my favorite chef-focused design. Love that neckerchief!

Every six months or so this flyer arrives from Holyoke’s oldest pizzeria, Italian Friendly.

Did you know they are Italian? I mean, they’re called Italian Friendly but just in case it wasn’t clear the following phrases appear on the front page:

“Ay, Forgettaboutit” (I always wondered how to spell that)

“Now you know what I’m talkin’ about”

Need more evidence? The inside menu lists such items as:

and (once again) “Bada Bing”

I’m surprised they didn’t put a cartoon Italian Stereotype chef on the front. To each their own, I guess.

Don’t let the absence of pizza box graphic design posts fool you; I’ve been eating/photographing just as much pizza as ever. Get ready for some rapid-fire box critique:

I get these street scene boxes so often (here and here) that I might have to come up with a name for the subgenre. Quaint city boxes? Cobblestonia? I’ll have to think on it.

l dig that the cuteness of the setting is married with traditional pizza box elements (“Hot & Delicious”, “Pizza”, a script font, and “Made just for you…”). The one downside is the color scheme, which feels a little too “autumn vomit.” Overall, though, it’s a pretty posh box.

This example came from Pizza Star, a solidly traditional slice place right off the New York State Thruway. Thin and greasy — just the thing for the long haul back home.

I don’t know where I got this one but it looks like it came off the set of Saved By The Bell. I love 1980s-era design (really, I kind of do) so this box gets a thumbs-up. (Additional points for the missing apostrophe on “Its.” Who doesn’t love a good typo?)

Back in the day, Luna Pizza had a great little cafe in Northampton MA that served up the best thin-crust pies in the valley. Predictably, they didn’t last. Just recently, we happened upon Luna’s other restaurant during a drive through Connecticut. The slices didn’t disappoint, and neither did this Dante-inspired box. Doesn’t it look like you’re peering into the mouth of hell? I guess it could just be a brick oven.

This is a new box design, but I love it anyway. The checkerboard print, the silhouette slices, the vintage styling…even the lowercase i in PiZZA is quirky and appealing.

I especially appreciate the extraneous wordiness of “Custom Made to Your Order.” Because Custom Made To Order would have been FAR TOO GENERAL.

And finally, Your Moment of Zen: A choice margherita pie from Hungry Ghost Bakery. Like a lot of nontraditional pizza places, they don’t do printed boxes. But when you’ve got this kind of crust bubble, you can get away with anything.