‘Til Death Do Us Part: Classic Sunday Lifetime

Haylie Duff Lifetime movies are almost impossible to resist. So when I flopped down on the coach after yoga and saw this: 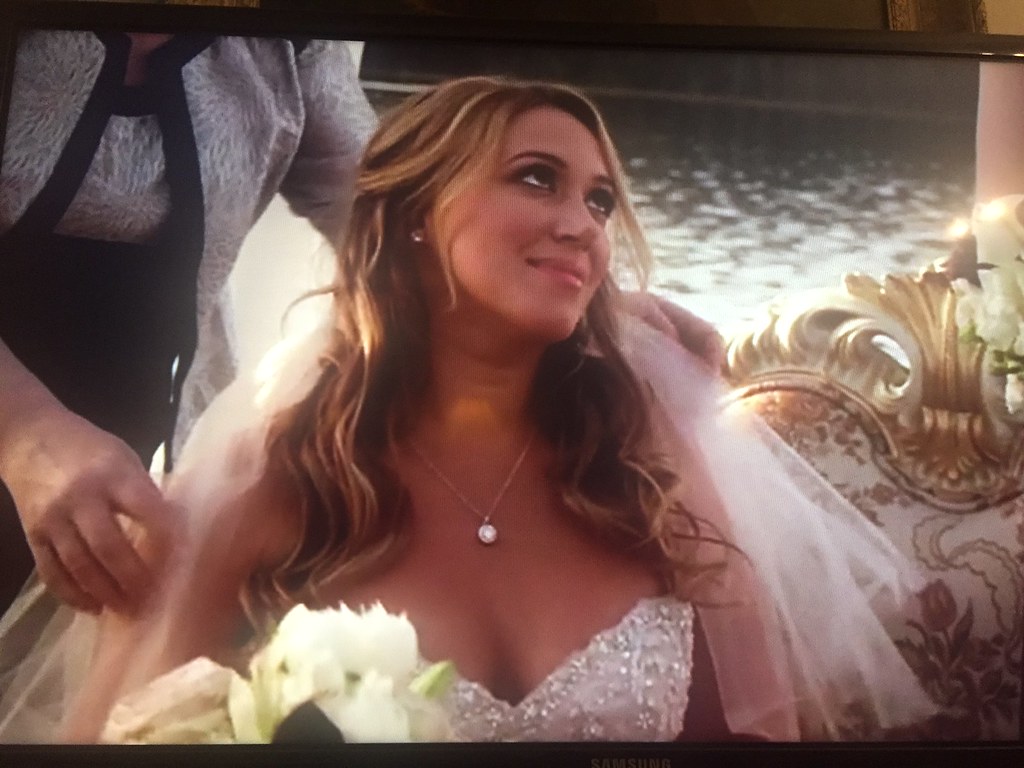 I knew my Sunday was basically shot.

Looking at the description, I had questions… 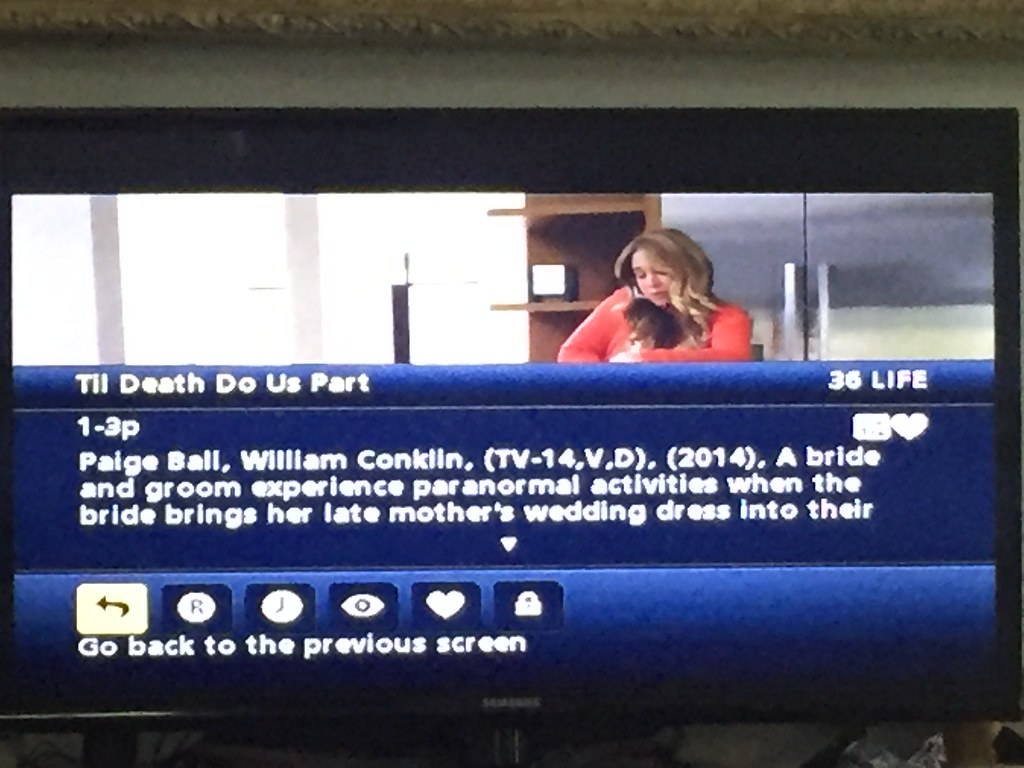 It’s a supernatural one? And is that really NOT a Duff?

Calm down, gentle readers. It’s totally a Duff — Comcast is just doing its usual bang up-job and displaying the description from the wrong movie. There’s no lame ghost crap, either. No, this Sunday treasure is classic Lifetime to its core: Haylie Duff, a simple evil husband plot, waste-no-time foreshadowing… it’s all here, people.

We open with a wedding, and we know this because we read it off a black and white title card like the ones on Frasier. 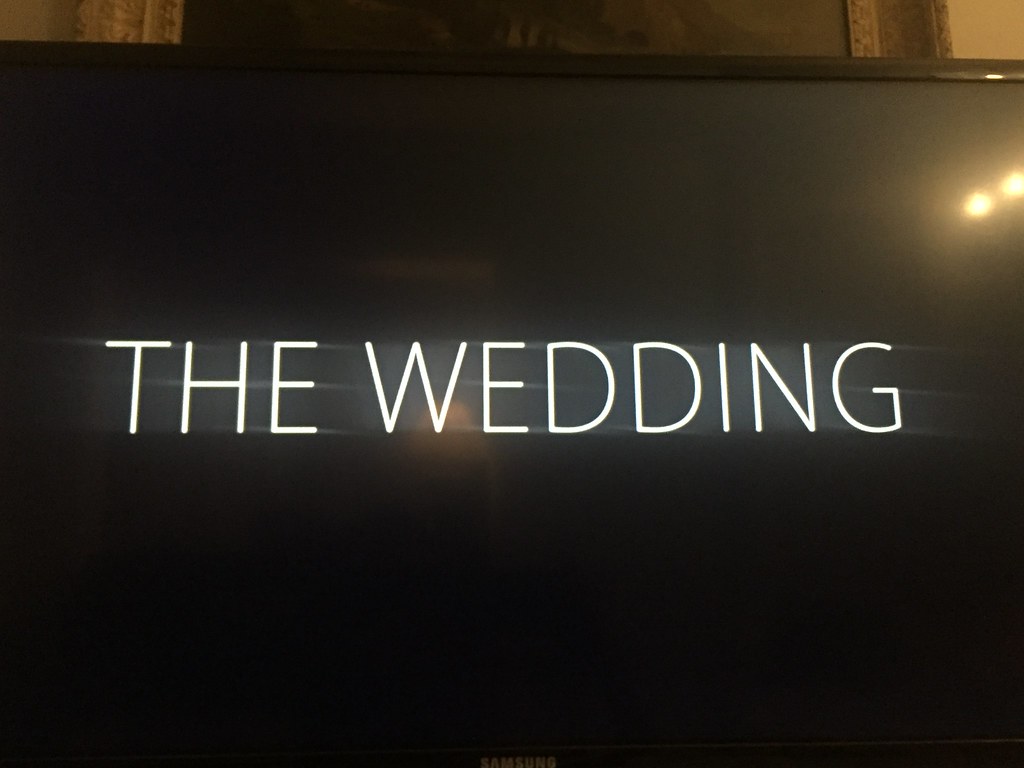 Okay, strange choice but I can accept it. The marrying couple is Haylie Duff and Evil Husbear. 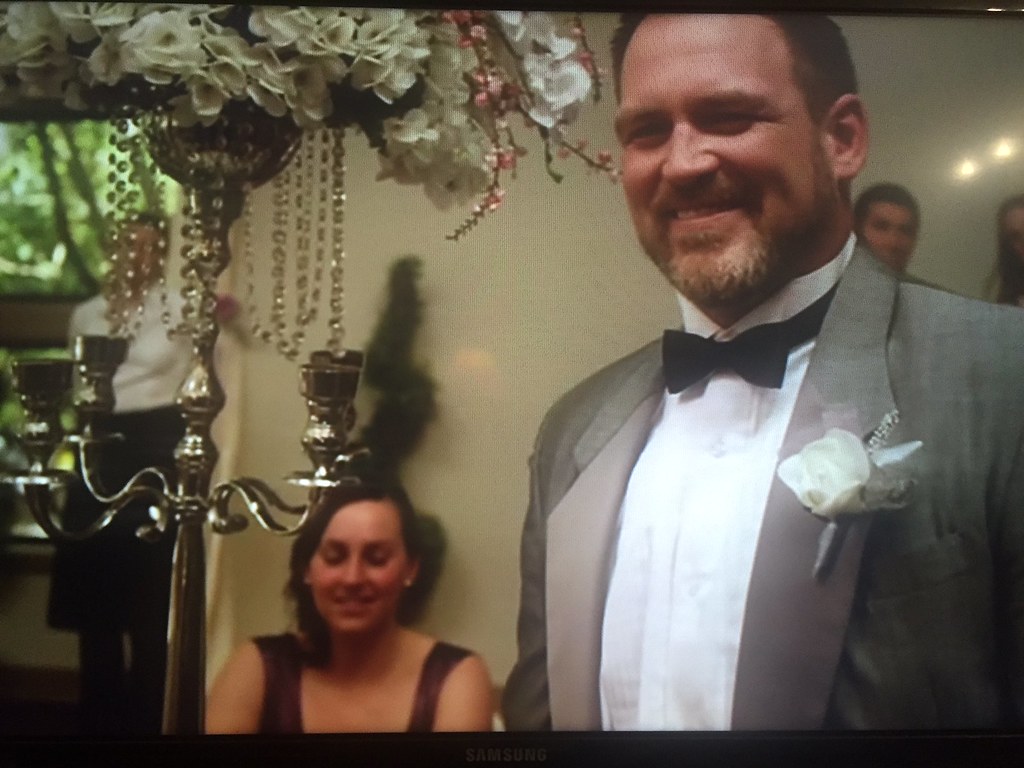 A beard IS pretty unusual for a Lifetime villain. They usually go for the Michael Douglas clean-shaven-MBA-douche look.

There are a couple of notable things about the wedding scene: 1) They find a new way to ruin the pretty-but-ALWAYS-used-in-tacky-weddings Bach Air on a G String. This time we get an all-synthesizer version for no reason. Isn’t real classical music super cheap to use? And 2) The bride/groom wedding dance segues from semi-classy slow dance to weird 80’s rock out with awkward seizure movements.

I chuckled at this because in another life Mr. Max and I lived in a rental facility that did weddings, and this is pretty accurate bad middle aged person dancing. Also that wedding dress is ugly (sorry, Haylie). 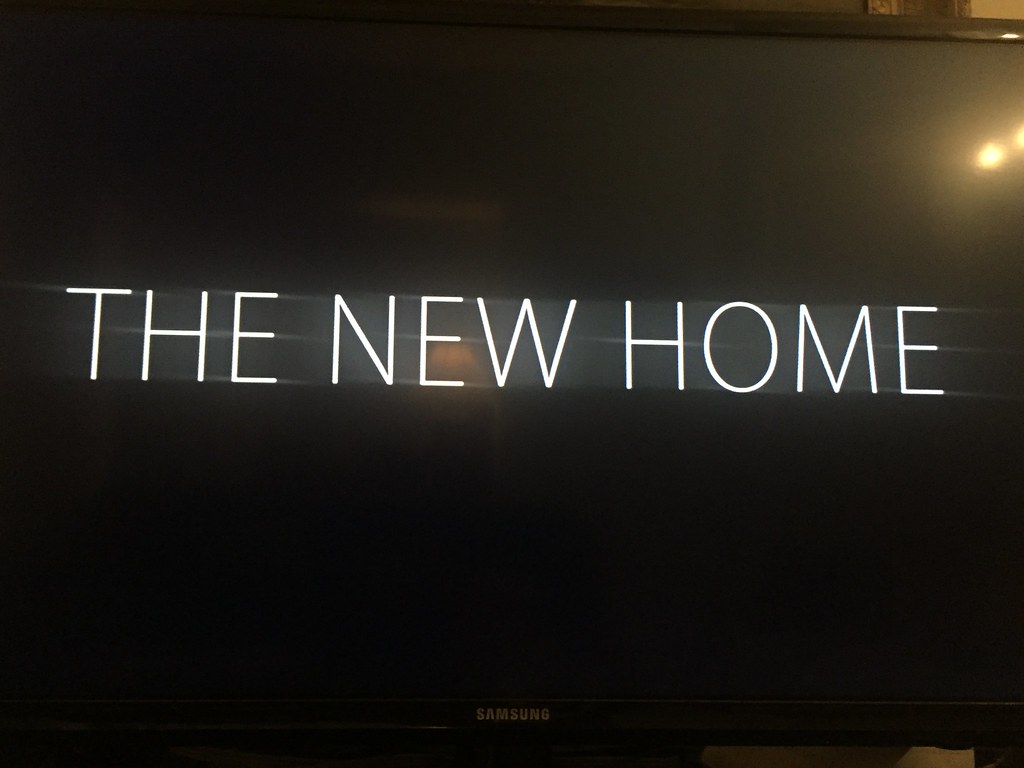 Apparently our newlyweds have moved into their dream home. The house is a bad modern House Hunters style house with weird cement crap on the outside and a big double vanity bathroom. Side note: why are ALL people on House Hunters obsessed with double vanities? It’s just a sink, call a plumber you can basically put that crap anywhere. Ahem.

Husbear comes over and says, “Hi I missed you” and gives Haylie a kiss that’s golden-retriever level sloppy. He’s basically drooling on her chin, it’s bad. This is the moment when I knew I would watch this movie in its entirety.

Haylie is surprised to learn that there’s a live-in gardener on the property. So am I – way to create a relatable protagonist, Lifetime. Gardener says “Have we met before” with a suspicious look, which is the Chekhov’s Gun of all Lifetime movies.

Now Husbear and Duff are unpacking, and Husbear unpacks his most prized possession… and it’s… it’s… 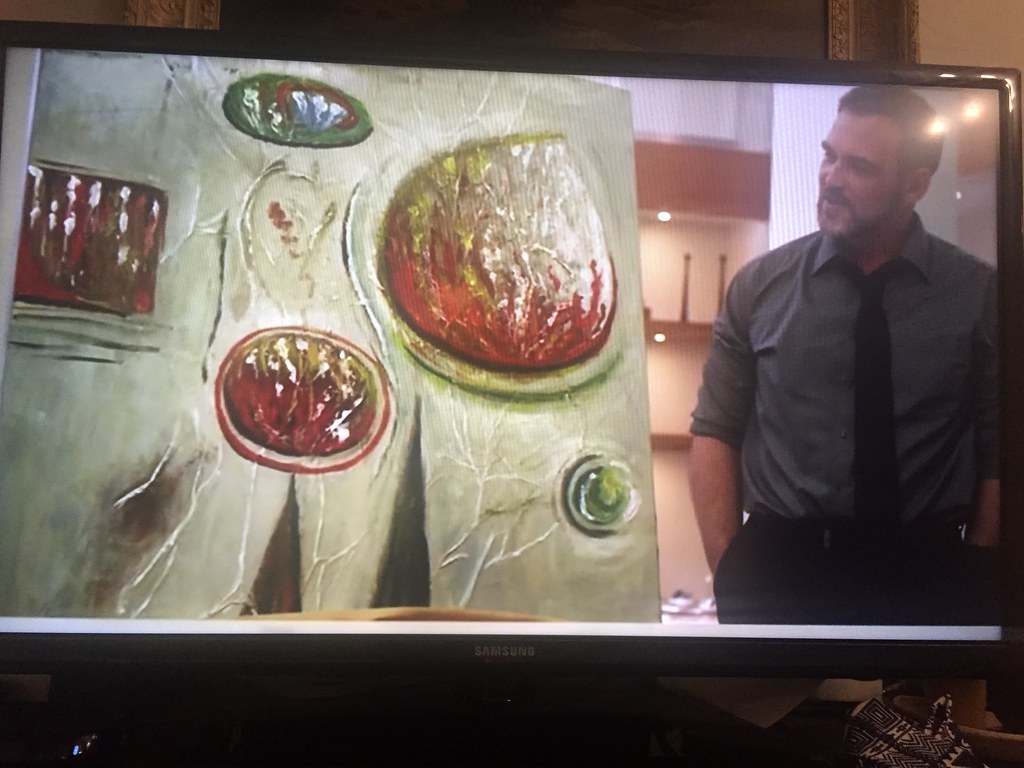 The craziest painting ever. Mr. Max was half asleep and asked if they had unwrapped a pizza from a box. On the Pizza to Artwork Likert scale, I would pick ‘strongly agree it looks like a pizza.’

Husbear babbles a bunch of arty bullshit about color and meaning – I don’t know, I kind of zoned out here.

Next title card. I should note that we’ve had 3 title cards in the space of about five minutes. This movie is 60% paper.

Finally the real creepiness begins: Haylie Duff wakes up with a nightmare and Husbear puts an oxygen mask up to her face. Huh. That probably won’t be important later.

Production Note: In the scene where Duff starts work as a substitute teacher, there’s no fade out between when she arrives at school and the next scene with her on the playground at the end of the day. It’s like they quantum leaped in time (using the power of sloppy editing).

There’s a young male teacher with a moustache who insists on giving her a lift home. He’s pushy but he’s probably just a red herring baddie.

Another Title card: TUESDAY (I guess we ran out of card ideas? I have a new appreciation for the Frasier writers.)

Now Haylie’s outside having an overshare with the live-in gardener. She says, “We got married so soon after we met, there’s a lot I’m still learning” Folksy gardener replies back about how he likes plants because “Plants don’t talk back to you.” Charming!

Next we get a flashbacky scene of Haylie taking some pills for a heart condition. Okay, the oxygen thing is starting to make more sense. 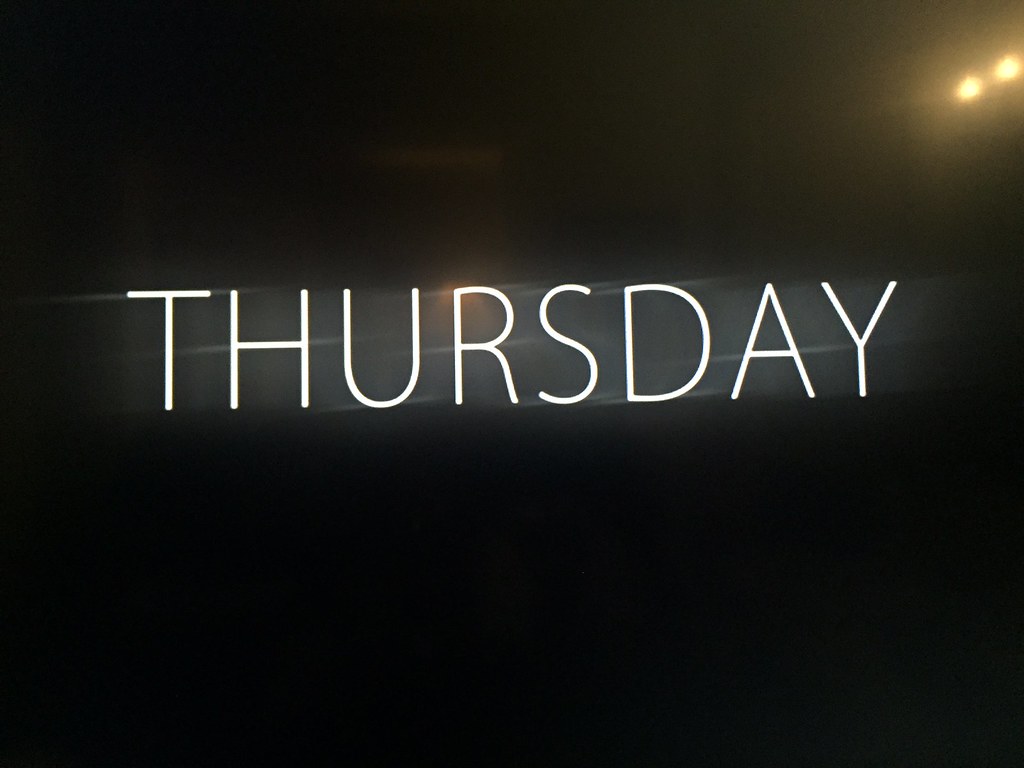 DEFINITELY out of title card ideas.

Evil Husbear meets Moustache Teacher and starts acting all jealous and controlling. Husbear’s Goth (why? We are never told) sister starts hanging out at the house too much and giving off incesty vibes. The Moustache teacher gets falsely accused of child molestation. Guys, guys – the gardener can’t find his dog. Shit’s about to get real. 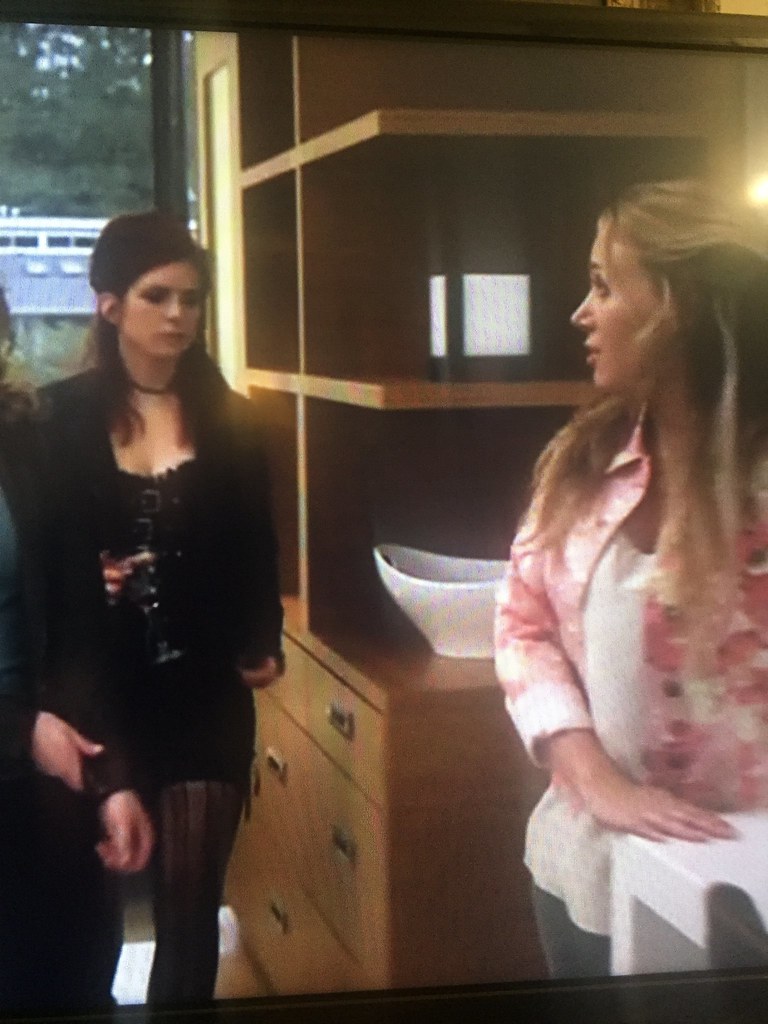 Seriously, why is the sister a goth?

THE PARTY: We haven’t had a title card for like 20 scenes but sure why not. 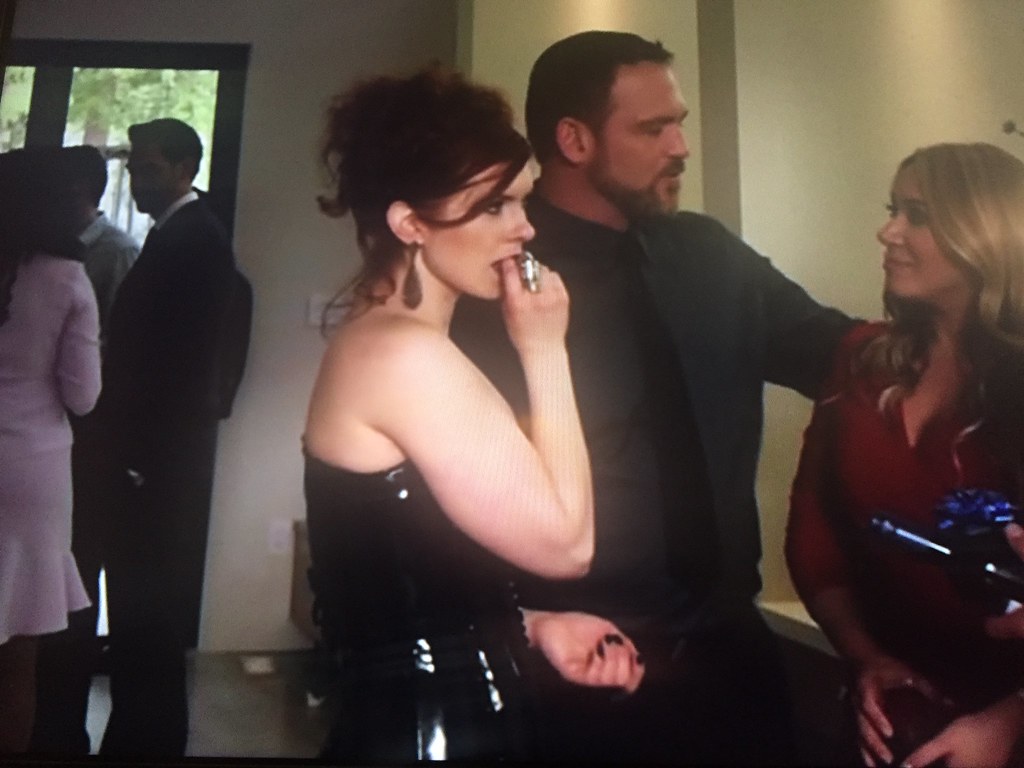 Fashion Corner: Duff wears the fancy dress Husbear bought her. It’s supposed to be super sexy but it kinda looks like a bathrobe. 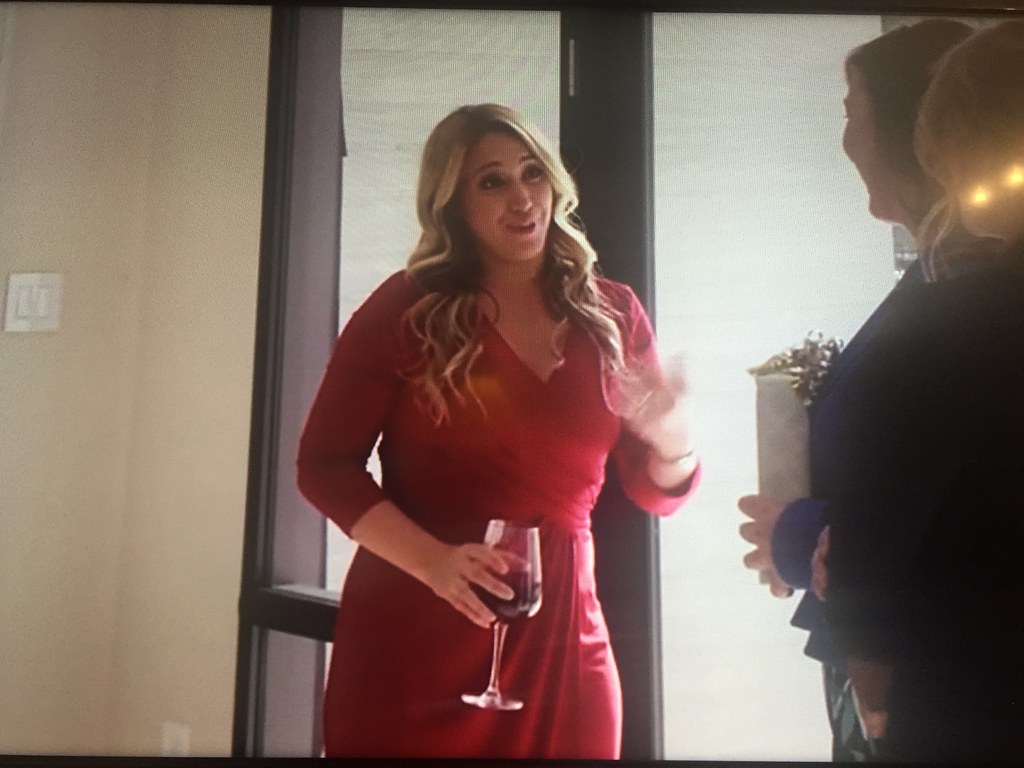 The plot moves pretty quickly from here. Gardener gets murdered for asking too many questions and Evil Husbear uses the old ‘your mom was bipolar’ trick to gaslight Haylie. After a visit to some unhelpful cops, Duff morphs into a self-investigating Lifetime heroine. There’s a scene where she Googles the logo on her “heart medication” and we’re supposed to be impressed by her craftiness. 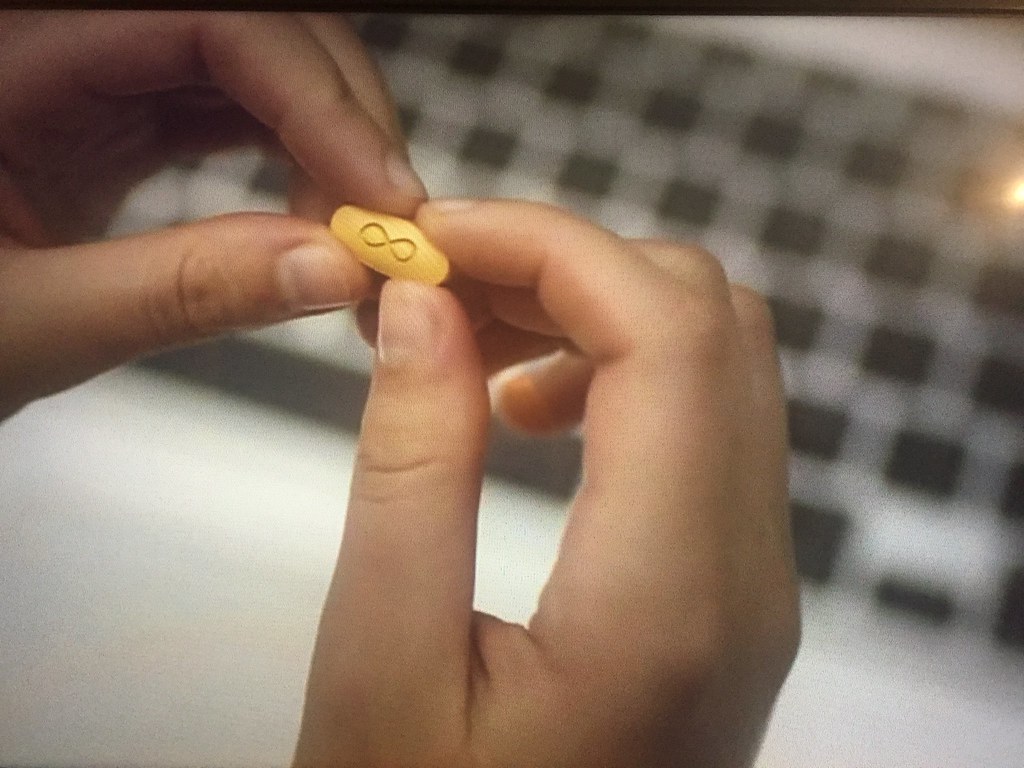 As a person with mild anxiety I use this skill all the time to make sure it’s ‘really Tylenol in that bottle’ so I thought of it in the first scene, but okay. Go Duff!

Now she’s hacking into Husbear’s computer. She finds webcam footage that proves that the gardener was killed, and copies it onto a flash drive. Smart. She yanks the flash drive while the file is totally still downloading. Ummm… 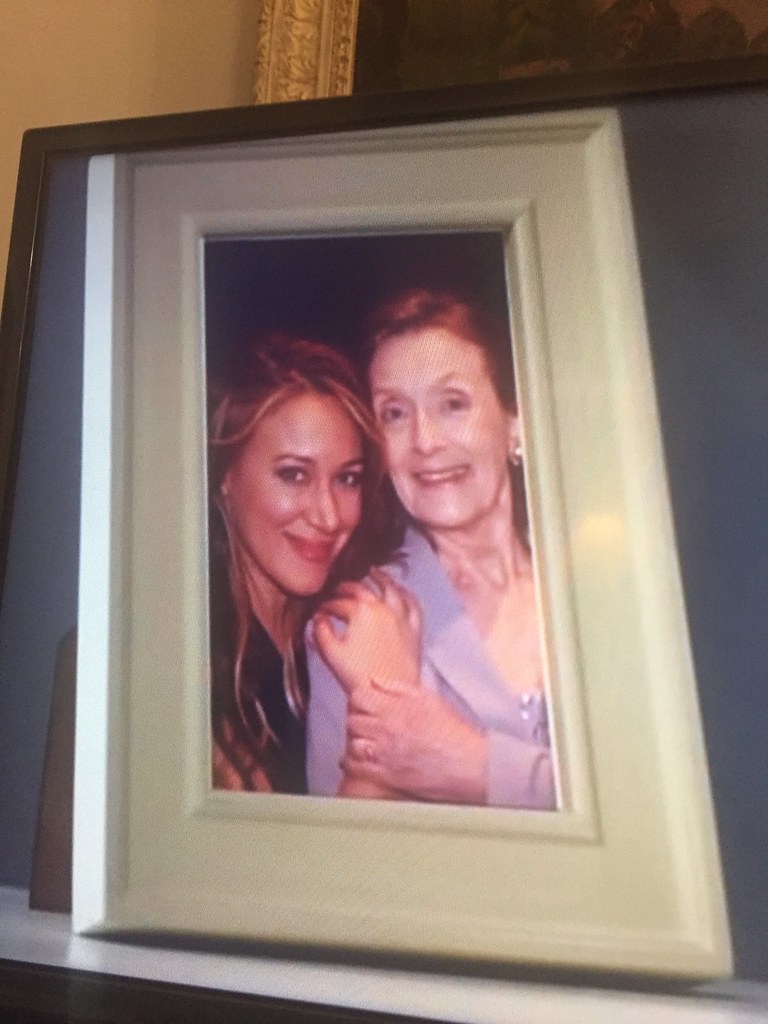 Eagle-eyed viewers will remember this turning your new wife into your old wife trope from one of my earliest reviews, of A Face to Die For.

Finally she gets caught snooping around for evidence by Evil Husbear and sister. 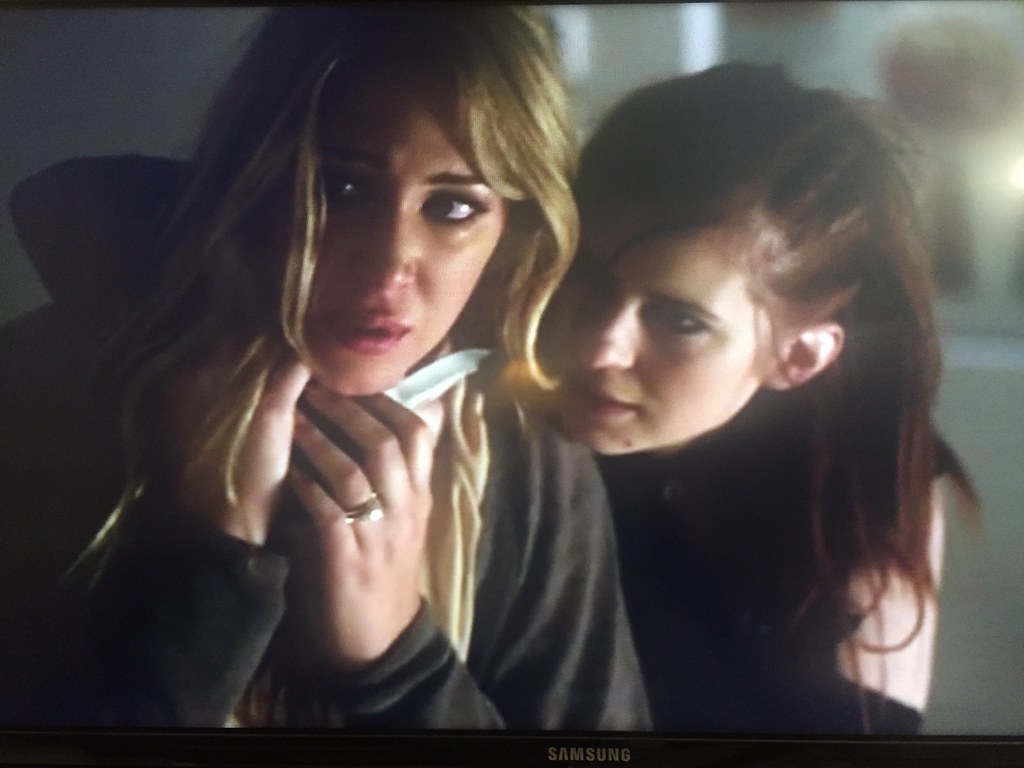 It’s two against one, but she gets in a direct punch to the balls before the cops show up. Sister aims a knife at Haylie, but hits Husbear instead. The cops arrest sister and escort Duff away from the crime scene. She looks longingly one last time at the hideous House Hunters house. 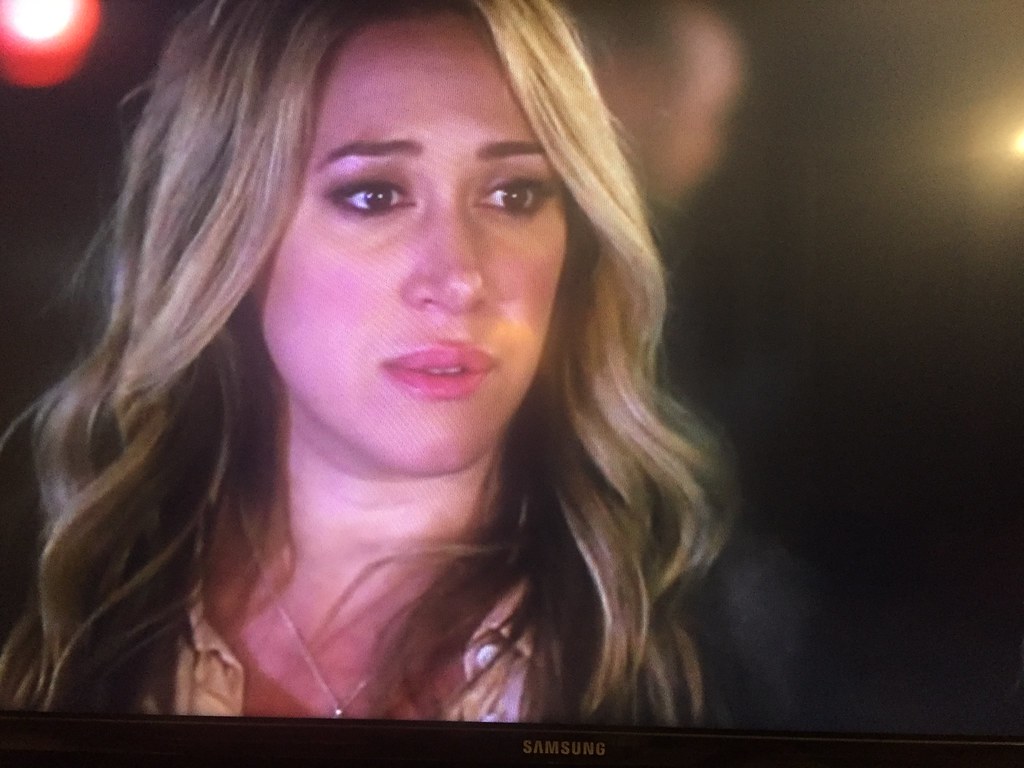 Overall Rating: Choice. Best laundry folding and/or drifting in and out of consciousness movie of 2016.